Today’s game – and training video – is all about selling!  No high pressure sales, or obnoxious sales pitch, but about identifying needs, building relationships, and maximizing the video game experience for guests!

For the moment, we’re ditching the food service industry in exchange for time in a video game store.  The year is 2003, and we’re taking part in Hollywood Video’s answer to the competitive retail video game market – GameCrazy!

I actually wrote about this particular training video over on Retroist, but the article has been lost to the interwebs.  That in itself is a tragedy, but thankfully, the actually training video is alive, well, and complete with Zelda Scott, who I’m sure GameCrazy regretted.

GameCrazy was established in Wilsonville, Oregon in 1998, an attempt by Hollywood Entertainment, parent company of video store chain Hollywood Video, to break into a competitive video game retail market. Store locations were generally, but not always, adjacent to Hollywood Video locations. The ability to buy, sell, and trade video games, systems, and accessories inside of Hollywood Video stores was made possible though GameCrazy, and all “next generation” platforms were equally represented in their selection.  The store also offered a loyalty program, the MVP, and allowed customers to “try before they buy” when considering used titles.

In late 2006, there were 634 GameCrazy stores adjacent to Hollywood Video locations, but by October 2007, its parent company, Movie Gallery, faced financial difficulties and steep competition.  Movie Gallery filed for Chapter 11 bankruptcy protection in October 2007, with 200 of GameCrazy’s 680 locations closing by October 2009.  By April 2010, the company and all of its interests were failing financially, forcing the company into Chapter 7 in May 2010.  It was believed that unprofitability on Hollywood Video’s part, due to competition from Blockbuster Video, Netflix, and RedBox, were the reasons behind Movie Gallery’s decision to close their stores.

As for GameCrazy, their website was relaunched in 2011 as a gaming blog, but went inactive by October 2014. 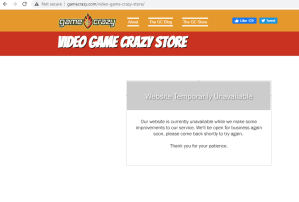 But back in 2003-2004, halfway between its beginnings as a GameStop/FuncoLand clone within a video store and its end as not competition for those other stores, GameCrazy created a training video, meant to look like a pre-game show for any sport, training employees on “The Keys To The Game,” and how to be an effective seller at GameCrazy.  This method of selling is a five-point system of selling customers on Hardware, Used Games, the MVP loyalty program, Trades, and Pre-Order.

No pressure, or loud, obnoxious sales pitches, just these five selling points, set to commentary by “Wish They Were ESPN Commentators” Keith Croft and Bobby Payne!

And how are the products sold?

And Zelda Scott to provide play-by-play of the sales floor.

I mean, they say their methods aren’t loud or obnoxious, but, Zelda, their “woman on the sidelines” *is* obnoxious.  The store is the “hizz-ouse,” and all the fly new game titles are there.

And so is Zelda. 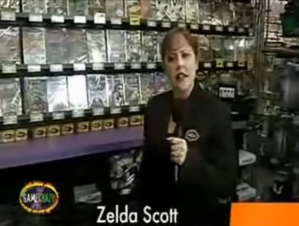 No lie, she drops gems like “Boo-yah!” and “playahs can get mad values!” (not even the best of her dialogue) as she explains each Key to the Game, all with total conviction and passion, like this is exactly the way you convince new hires to follow policies!

It’s associate Ryan Taillon versus Ann the Soccer Mom, and which console would be perfect for her almost-twelve-year-old son.

Second up, high bargains and great values in USED GAMES! 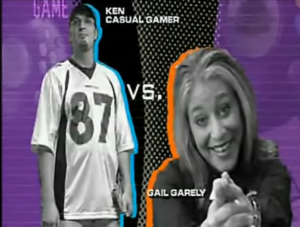 This time, it’s Gail Garely versus Ken the Casual Gamer.  He wants Madden 2004, but need convincing on used games.  Gail tries to selling him “this used thing,” which apparently doesn’t take much convincing once she tells him he can “try it before he buys it.” 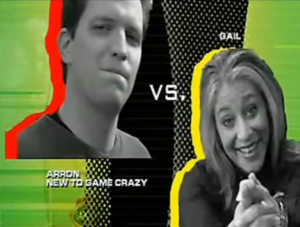 (Was this best photo they could get of Gail?)

Gail is back, and this time, it is her opportunity to convert Big Box Devotee Aaron.  She explains trading in games he’s already beaten so he can get store credit that can be used to purchase new games.  And then there’s the MVP Loyalty Program – ten percent more value for trade-ins, special exclusive deals, and special tournaments.  She totally sells Aaron on a Soul Calibur tournament, which is good enough for him to become an MVP!

Next up, Ryan is back for PRE-ORDERS!

Ryan’s challenger is Hardcore Gamer Tara.  He sees her Final Fantasy shirt, and sells her on pre-ordering the latest Final Fantasy game, because it will definitely sell out, definitely!  She initially hesitates because of the $5 deposit, but she’s an MVP member, and has store credit from trade-ins.  Oh, and there’s a pre-owned Kingdom Hearts copy that “looks pretty cool” to Tara.

The final step in the challenge is “closing the sale,” and these masters of sales, Ryan and Gail, are good at accomplishing this!  Ryan sells Ann the Soccer Mom on console accessories and Tara on Kingdom Hearts, and Gail sells Ken on trying pre-owned games before he buys them, an Aaron on Soul Calibur.  It is a very winning day at GameCrazy!

And once we’ve covered the methods, it is time for the Selling Skills Challenge post-game report, which goes over the Keys to the Game in a Readers Digest-style explanation. And then of course, there’s Zelda Scott and her attempt at speaking in a way that new hires could easily relate to. 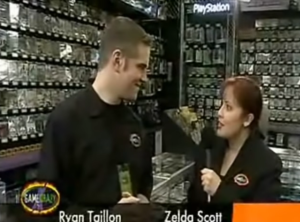 I have watched many training videos over the last year, and even without the knowledge of these videos, I can tell you that Zelda’s ridiculous delivery absolutely does not work, but it makes for an entertaining training video!

Unfortunately, the only un-riffed version of the 2003 training video is edited, so it ends after the Keys to the Game are  displayed.  All the riffed versions include the post-game report that wraps it up nicely.  My favorite version is the one from The Spoony Experiment, which I’ll warn you in advance is a bit explicit.

But this is the original video, without commentary and shame!

GameCrazy’s Keys to the Game couldn’t keep them ahead of the competition, but they certainly knew how to make a great training video.

And it wasn’t their only one.

Despite being clearly in trouble, “The GC” decided to produce another video in 2009.  Like all the “wait, there’s another!” promises I make at the end of these articles, that’s a story for another time…and article!

Zelda will not return.  Because people can’t forget.