No, I didn’t say “enjoy this rockin’ version of mononucleosis!” That would just be horrible of me, not to mention uncharacteristic of me to wish “the kissing disease” on you.

Though I will admit, I always found that name funny.

Anyway, diseases we never want aside, let’s talk a little bit about my YouTube Playlist, a random smattering of apparently related songs, thrown together for the ultimate mixtape experience.  When I’m on the treadmill at night, I rely on my playlist to keep me motivated.  Of course, I sometimes mix the playlist in with watching a commercial block from the 80s, or a television show, but this playlist works wonders for me, both at work and especially on the treadmill.

My playlist/digital mixtape features the likes of Hall and Oats, Dire Straits, Michael McDonald, The Doobie Brothers, Kenny Loggins, and one group named for The Windy City.

You have your motivational workout music, I have mine.  Mine just involves lots of long hair, beards, doing the “Walk of Life,” and making Daryl and John’s dreams come true.

One of the songs on my “mixtape” comes from 1974, but is actually featured in a 1993 concert video clip from Chicago Live At the Greek Theater.  This concert, filmed in July 1993 and known for the “sneak preview” performance of “The Pull” from the lost Chicago album The Stone of Sisyphus (famously unreleased for 14 years), also features a pretty rockin’ version of a song from their album Chicago VII.

Manning the timbales for this performance, (this was during the time Laudir de Oliveira was their percussionist) was James Pankow.  Pankow, famous for being the group’s Trombonist – and as Robert Lamm referred to him in a concert clip from, I believe 2016, “choreographer” – composed this song, the ultimate jam session-style song, which shows the full scope of what happens when you bring horns, rock, and a Latin beat to mix in the blender.  Done live, it is a full-on demonstration of what this group is known for – high-energy, fully-immersive performance.

In this case, you get “Mongonucleosis.”

I have no idea where that name came from. 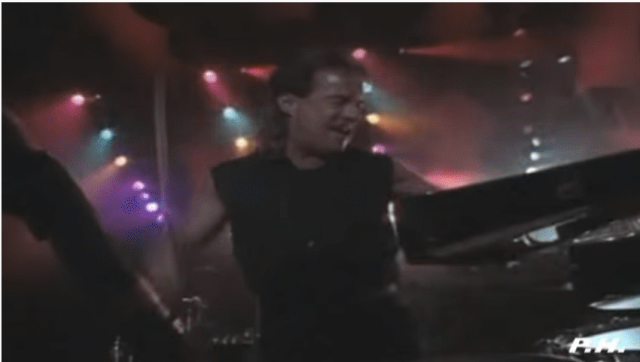 No vocals (well, briefly on the album version, courtesy of Robert Lamm, Peter Cetera, and James Pankow), but just a whole lotta instrumentals, “Mongonucleosis” is a staple of live concerts, especially close to the beginning of their set list, despite never having an actual release as a single.  Short by comparison to many of their songs, sweet, and to the point (not to mention funky and fast!), if the percussions don’t catch you, the trumpet stylings of Lee Loughnane will.

Now, the reason I point out the 1993 version of this song is that by this time, Chicago was performing as a beautiful unit once again – gone were the drugs and turmoil of the 1970s and 1980s.  What was happening in 1993 was a beautiful preview of what would happen during the later – and current – years.  This is a group that, despite its hit-making years being almost behind them, were playing with the passion of a group that was finding their wonderful rhythm all over again.

At this time, the group had been working on Stone of Sisyphus, which was a return to form, a passion project of personal songs and no outside influences (read: no outside writers).  It truly reflects in their performances at this point – this was a group that was in their element, and enjoying their successes.

Sure, their concerts of the 1970s and 1980s are incredible, but there is just something about watching their 90s (and beyond) performances. It is truly a preview of what would come in the years that followed.

I’ve seen this song performed at both Chicago concerts I’ve been to (2015 and 2019), and they perform this with the passion and conviction seen in those earlier performances.

From 1993 at the Greek Theater in Los Angeles, California, please enjoy this incredible version of 1974’s “Mongonucleosis,” or “the jammin’ song with the strange name.”

My emphasis, not theirs.

It’s hard not to get excited when Lee Loughnane completes an incredible performance.